The story of my first Mother’s Day; A primer for growing older than my Mother 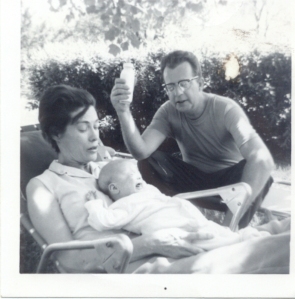 When I was a baby,  my Mom died.  She didn’t make it to the age of 41 and she didn’t make it a year as my Mother.  She left behind my Father, my exactly 15.5 years older than me brother and me.  I’ve written the story of how she  chose to take some experimetnal drugs while carrying me and fighting breast cancer, how I was  expected to be born an absolute vegetative mess,  how I was considered the miracle baby in my family. I was given my paternal grandmother’s name for my first name and my mother middle name (and the name she went by)  as my middle name.  I grew up hearing story after story of how strong personality wise my grandmother was.  But I didn’t really get to hear all that much about my Mother.

I don’t know all that much about my Mom as a person. She, MiniMe and I share a middle name.   I know facts about her family life and history, a little bit about the things she loved to do.  I have some of her things.   But  no matter how many times I’d try to discuss her with my Dad, it must of been too painful or contain too much emotion because I never got very far.   I felt my whole childhood like I was some kind of emotionally driven stranger  in a house full of people  who didn’t or couldn’t or wouldn’t express or feel or talk about things.  I often felt shut down and frustrated. I’d get little bit of information about her, but she was my Mother and I hated my Step Mother and I was always desperate for more.  I never went to her grave until I called a family freind and begged him to tell me where she was buried so I could go see it.  I was a young adult.    I wanted to have some connection, some way to put my finger on something and say this was her, this is you, you are in fact bound together even in absence.   It wasn’t until I  was graduating from college and my  my Mom’s one living sister came and declared that I was “just” like my Mother  that I started to feel like there was a connection between us beyond my name and the fact I’d been made to take piano lessons for years because she was a great pianist and piano teacher.   I was put in piano lessons about age 6 because she was a well respected local Piano teacher when she was living.  There was a huge 8.5′ concert grand piano in my house growing up,  and later in my first house.  It was hers.   My piano teacher, Afffie  had known my Mom and taught with her in the state Piano Teachers Association.  My Mom had at one time been the president.     A typical kid,  I didn’t enjoy the practicing as much as I could of, but I played until I was in High School and won the recital contest at the High School level ( I always wondered if I was given preferential treatment at those because they were run and judged by ladies  and men who knew “who I was”.   High School was the highest division, if you won a division you had to compete the next year in the division above yours, and at the time I was a freshman.   There was no division above mine and I was a teenager who was done with lessons and practice so I quit.  I haven’t really played since and i can’t read music anymore either.   I sold the  grand old piano when MiniMe was a  toddler because it ate up an entire room in my home and even though it was a great statement piece and a perfect place to keep the wrapped Christmas presents,  I couldn’t justify an entire room housing a relic I never used and was unlikely to revisit.    The piano was probably metaphorically as big as the hole in my heart for her absence, but it was time to move on, as an adult and a mother, from hanging on to  impractical things just for the sake of sentimentality.   But I have always yearned for her, always missed her presence in my life and always wished she could of lived and  been thre to Mother me.  In my mind, anything would of been better than what I had.

Once I got pregnant with MiniMe I felt another connection to her.  I was 31 when MiniMe was born and I started paying very very close attention to  what I was sharing with my baby in those first six months while simultaneously trying not to lose my  shit over “was I going to somehow die in her first 6 months and  abandon her”.  I wrote monthly  email updates to all of our family and friends about how she and we were progressing.   As  we neared the 6 month mark I started to get specific.  I am a details girl, in case you haven’t already figured that out, and I wanted to know exactly how old I was when she died.   I wanted to mark and take note of the day.  So I did the math and the result  brought me to massive tears.  Here is the excerpt from that month’s writing.

As I was walking in the RFTC with my long list of “In Memory Of” names on my back, I began to reflect on being a Mother to my Daughter for the last 6 months.  My Mother died when I was six months old. And prior to having MiniMe I used to think what an incredibly short amount of time that was.  I also wondered exactly when in my life she died.  I checked and I was exactly 6 months and 10 days old when my mother died. Now that I am on the other side of the equation I can tell you that 6 months and 10 days is really quite a long time. I know how much my daughter loves me right now. I know my Mother must have felt the same love coming from me.  So even though I can’t remember what it felt like to be held or snuggled or kissed by her, I am certain we shared the same special moments that MiniMeand I share now. I feel blessed to be alive and able to mother my child for much longer. I will be celebrating this special event with my Daughter on Mothers Day, when Haley will be exactly 6 months and 10 days old.

MiniMe was a c-section baby.  Her delivery date was chosen because I was carrying about 3 weeks bigger than I should of been and they were afraid she wasn’t going to make it out.   I went in for an appointment on my due date with zero dilation and zero effacing.   I think we should go ahead and take her they told me.  Do you want to do it tonight or Monday?  I chose later that night and gave up one last date night and a nice dinner we had reservations for. I often felt like that was a stupid move in those first few months of her life.  I wished for that one last dinner with The Husband.    As her Mother I was sacred, lost, often angry and frustrated on the inside.  I sat nursing her night after night wondering what it was like for my Mom.  Holding a baby she knows she isn’t going to see grow up.   Wondering why she never bothered to write me even one single letter or note or anything else that might help me know she loved me.

And then to have my first Mother’s Day land exactly on the mark in time when I was losing my Mom as a baby. It felt like the letter I’d been  searching for my whole life.