Running sick. Running in the rain. 4 weeks till Race Day

This stall is so small I had to open the door to get the pic. Apparently I ran with my gangsta hat on.

For starters it really isn’t 4 weeks until Race Day.  It’s 4  Saturdays until Race Day.   LAST week, Running buddy and I both slacked off.  We skipped our Sunday 7 miles and I pretended I was already on my Chi town vacation by drinking vodka with SIL.   I did technically put 4 miles in along Lake Michigan on Tuesday, but given my condition it hardly counts as true training.  Considering  a threaded topic was whether or not I was indeed going to puke again that morning while running. I haven’t done that yet and to be honest I’m sort of nostalgically looking forward to my first run exerted puke session.   Alas it was not  to be on  Tuesday.  So last week was a big 4 mile week.  This means that because the race is only 4 weeks away that THERE WILL BE NO MORE SCREWING AROUND WITH TRAINING.

Which also meant when the  tell tale my lips are really dry and a few sneezes here and there over the last two weeks finally came to a head and I succumbed to an awful head cold with nasty typhoid Mary cough; that i had no choice but to be a badass, suck it up and run the scheduled 7.0 on Sunday.   Now in all fairness I managed to suck it up just fine for a concert the night before.  So I really had no excuses to not run, other than I had doubts of if I would even be able to breathe, like at all.   It’s usually my responsibility to plan the running buddy route, so I planned for 3 loops, 2 small and one large taking us past our hood entrance for water stops.  i figured I could make it through 2 miles no matter what and I could bail on her if I had to after the first water stop.  But I also took very precaution I could to ensure I was fueled, hydrated and nasally dried out before we started.  Running buddy and I knocked out 7.21 fabulous miles on Sunday night.  We literally rocked it.  I   had very little cold symptoms while sweating it out.  I felt great when we were done and great for the rest of the night.  And then I woke Monday morning feeling just awful.   All day it was  Dayquil. Finally at like 3 am on 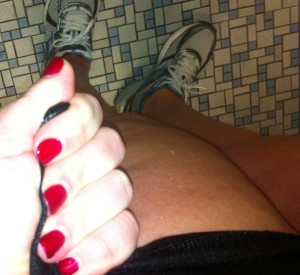 Wet running skirts do a good job of staying down

Monday night I took Deslym, I doubt my family slept well with all the coughing either.

Tuesday morning I canceled the kids dentist appts because I just wasn’t going to be up to taking them.   And all day long I tried to decide if I was going to make the drive downtown to  do the big group class/run.  Again I was worried about ability to breathe.  But again I decided I better just do it and headed downtown. I was smart this time, no more changing in the tiny cramped, hot  church bathroom. I arrived dressed, heart rate monitored up and ready to go.  All I had to do was stretch through the last 20 minutes of the class and then get in the 4.o mile group.   I couldn’t figure out why it seemed like it was such a light group and then  as we started out I got a look at the sky and felt the breeze.   A storm was coming.  This is my thoughts on choosing whether or not to train in rain.  If it rains during the 13.1 miles are you just going to quit? Um no you are not, so put your big girl panties on and run.  Within the first 1/4  mile the sky opened up and started just pouring down in driving sheets of rain.  The wind was strong and someone made a comment about what fun it would be on the bridge, up hill.     I have run in the rain before and to be honest I kind of like it.    It’s sort of like being a kid all over again.    I’ll admit  I was a little scared running in the oil slick street crossing because those damn white lines are slick  when they are wet. But I remembered I’d done this before and if I just kept my cool I’d keep my footing.   Some runners went around the puddles in long arcs to avoid them. To me that is juts extra effort to avoid wet feet you are going to get anyway so I splashed right through  the puddles.  I briefly worried about blisters but after the water stop and heading back down the bridge my feet felt wet, but still great and I hoped my socks would sit just right.   The other great thing about rain running is if you are wearing a skirt it gets wet and stays down.  I am ALWAYS worried that my skirt is flipping up and showing my boy short inner liner covered ass while I’m running .  Rain alleviates that fear.  I don’t do intervals on Tuesdays, well not planned ones. I just run until I need to walk and then run again as soon as I can breathe to do it. Yesterday I mostly ran and it felt great.   I also got a little closer to the fast group  this time. It was  even still a good run when I went one block too far and had to run down a busy bar and restaurant street.  Oops vanity will propel you quite quickly.   4.49 miles later I was ready to change into some dry clothes and head out.

The only thing I DON”T like about rain running is trying to get tight soaked sweaty clothing off.   I swear I have some kind of irrational fear 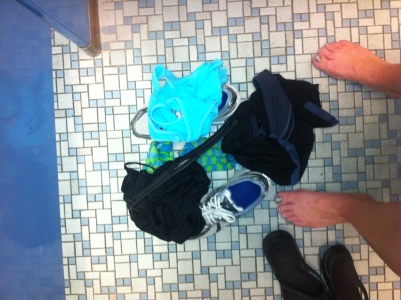 Prune feet after wresting off the soaked clothing. I assure you I am standing. 🙂

of getting pinned in a shirt.  I feel like i have wide shoulders and I’m always wrestling myself into and out of running clothing that appears to fit just dandy once on.   Tomorrow is another 4, and I suppose I have to also find a way to do that cross training I promised running buddy I would do as well.