The Alkaline Trio two shows at Metro in Chicago adventure 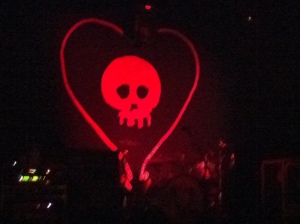 Last week the Husband and I snuck off to Metro in Chicago for not one , but two Alkaline Trio shows.

Metro in Chicago is this old, architecturally  astounding like  maybe  1200 person  venue.   There is a very small main floor and an even smaller balcony.    This is the midwest in  August in a record heat wave. It is HOTTER THAN A MOFO in that place.  But it is worth it to see a band so close.   The sound could be a little better, I had a horrible time understanding what Matt was singing both nights if it wasn’t a song that I knew inside and out.   I never have a hard time understanding what Dan is saying. His singing voice is like salve to my heart.  The problem wasn’t Matt though, it was me.  I’ve still got some listening to do.  Alkaline Trio has been around for 15 years but I’ve only been a fan for about 1.   Alkaline Trio got their start in Chicago. This is their town, this is their venue, this is where it all started for them.   This is their 15th Anniversary Show and they brought  along the Smoking Popes and River City Extension for the ride.  And even though both are bands I’d never heard both are really good bands.   Metro is non smoking inside, which has to be not only for air quality but also safety because I am telling you that place is tiny.   The bar is cash only and this is how the drinks are poured. 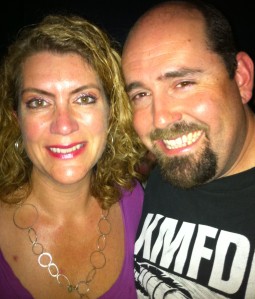 The double s are poured like shots. It’s more like fill a 20oz glass full of ice and vodka and then put a splash of diet coke on top for color.   I can only assume that the singles are poured like doubles. I wouldn’t really know, but here is what I did find out.  A half empty stomach, a very hot club, and 3 of the Metros doubles from hell will make you have to leave the show in the middle of Clavicle the first night.

We had already left too late from the hotel earlier that night and encountered Paul McCartney concert traffic.  We arrived to the club  near the end of the Smoking Popes set but still got very good floor near the back standing room.    We also both had really high expectations for seeing this band that connects us as a couple.  I offered to take one for the team and stay in the form of  “I’m ready when you are”.   I must of looked pretty awful on our way out because security gave me a whole bottle of water.   Then I remember some puking on a cab with my head hanging out the window.  Metro is in a big bar district which has to make puking pretty common right?  At least I am a considerate drunk and  it wasn’t IN the cab.       I usually make a plan and tell somebody else what the plan is and stick to it for my liquor.   I failed to adjust my plan on the strength of the drinks and the heat. And I paid the price.   On the upside we had tickets for both nights and Monday night was the earlier show.  I was passed out in my hotel room before 11pm.  .  I dragged my  hungover butt out of bed on Tuesday morning at 8:30 for the 4 mile runnsihmostlywalk along the lake with The Husband while I got a lecture I deserved on what should probably be done differently on night two.

Yes that IS a lady riding a jaguar with her boob showing. I think this is false advertising. If I go in that bar I will NOT be able to get a boob out and ride a jaguar. In line Tuesday 08/02

We had a nice lazy day involving nothing more than a yummy brunch that I wished I had more of an appetite for  and a long aimless walk around Millennium Park.    Dinner was an awesome little  Mexican place right across the street from Metro and we got there in plenty of time to line up with the crowd before the doors opened.  This gave us a spot right on the rail of the  balcony where I remained without leaving once to pee or drink anything for the rest of the night.   So we were able to rock on from start to finish and then head  back to the hotel to bed.  And this time no one puked on the cab.

Overall I’d say this show experience was bittersweet for us.     Alkaline Trio has been a band for 15 years, but is a new band for us.   The Husband found them via This Addiction on Faction. That led him to deeper research and  Radio, his I should fuck off and die song during the worst of the almost divorce.    He later  turns me on to This Addiction album.   At some point I tell him about how much I love Alkaline Trio and he leads me to Radio  for myself.  So it could be my fuck off and die song for PJ.    There is no happier tune to angrier lyrics ever written. C-Lo Green’s Fuck You pales in comparison  to  Radio .  Yet they didn’t play it either night.  Radio is lyrical genius.   It wasn’t awkward getting music from The Husband during the almost divorce.   We had a mostly amicable almost divorce, you might even say it was fairly civilized.  Which means it still  sucked gigantic donkey balls but was made slightly  more tolerable by the fact that we could still connect.      They also didn’t play a single solitary thing from This Addiction either night.    So we had gone to two shows hoping to hear any  of our songs we most love live, and  missed hearing a majority if them because they weren’t played.   Monday night someone in the crowd  had a set list on an iphone so we had already been delivered the disappointment that we wouldn’t be hearing anything from This Addiction.   All  the music was great because AK3 is an awesome band,   but it just wasn’t going to be a legendary spectacular concert adventure night.  It was just a show we missed some of.   Which I know disappointed both of us.   We both love this band, it connects us in a weird sort of healing way.  All of the hate has long since evaporated for both of us but we BOTH wanted to hear Radio, and we  might of missed it.    Tuesday night they didn’t play it either but we left left feeling much better.  We agreed on the cab ride home that we had more listening to do.  But we both love the band enough to keep doing that listening and catch them another time when we can better sing along to the earlier stuff.   I’d even like to go see Dan at that lady riding a jaguar place, but it’s on a week night and a long drive.   Maybe I could listen to this on the way up…It’s a live version of Radio at Metro Playing a Halloween Show in 2002.   Nice make-up there Matt.  I think I like the shirt and tie from  Monday night best. 🙂

I went away this week to Chicago with The Husband.  We saw both Alkaline Trio shows at The Metro.   There is no and..that’s all we did.  Well we did go on a nice walk in Millennium Park and do some canoodling while dangling our feet in the cool water feature.  We did go for a 4 mile runnishmostlywalk,  because I was quite not well, along  the Lakeshore Drive path. Running literally right next to the water and boats at the marinas, from our hotel corner all the way down to the museums and back.   Other than those two things we were simply there for the adventure of going to those two shows.    Part of that adventure for me is always staying in the hotel room.   Let me inform you if you haven’t already figured it out… I am a high rent girl.   I can  pseudo rough it at the Chateau in the woods for 3 or so days on one shower and no make-up.   But when I’m on an adventure, an escape. I prefer to treat myself to the taste I actually have instead of limit myself to the more moderate daily life I lead.   I would go as far as to say that The Husband and I choose to live the more moderate daily life so we CAN  go with the higher style we could afford pre-kids when we treat ourselves.    But that doesn’t mean I’m not still going to try to get that splurge as cheaply as possible.  I am the woman who breast fed mostly because it was FREE.    So lately whenever I am booking a night away for my girlfriends and I to stay downtown and hit the bars, or an escape or an adventure, I  have been scoring the BEST rooms on Priceline.    And this time was no different. I scored us two nights at The Hyatt on Wacker Drive literally right on the river.  It was an amazing river/lake view room,  we were upgraded once we got there and checked in.  I go into the bathroom and look for my favorite hotel room friend.  My frenemy, the one thing in the hotel room bathroom that no matter how hard I try to stay away , I simply cannot help but take just a small peek.  And then like the jaws of some movie vixen I am suddenly trapped in front of it for what seems like hours.   The magnifying make-up mirror.  Almost always mounted nicely on the wall right where I like it, even better if it is somehow lit.  BUT this particular bathroom was like the nirvana of all picking your face into oblivion, fretting over where did ALL those hairs come from and OMG what is that huge age spot on the side of my eye experiences that came before it.  This bathroom also somehow had magical light.  The big mirror was surrounded bu this sort of back-lit bulbs lighting that once you stepped into that bathroom you suddenly were transformed into some magical creature.  For starters it showed me the color of my eyes in my reflection better than I’ve ever seen in a mirror and only a true handful of times captured on cam.   And then it did this thing with sort of putting light on my hair.  It was suddenly being transformed into the lighting for a really expensive photo shoot for a cover shot in some fabulous magazine.   I told The Husband more than once that I wanted that damn mirror in my bathroom at home.   Add the boosted nirvana from the large mirror to the little make-up mirror.  Because it was also lit with the same soft expensive photo shoot lighting.

This is where I have to make the confession that I am a picker. A squeezer. I get mass satisfaction from gross goo shooting out of things on my skin.  I am one of those people who would Google those YouTube videos of people getting back cysts lanced.   I haven’t actually looked those videos up yet because I am a tiny bit afraid of how much I might like watching them.   When I retire I should become an Estheticion just so I can squeeze others people zits for a living.  That would probably make me very very happy for a little bit.   But not nearly as happy as squeezing and picking at my own face makes me.  And there is no better place to do this activity than in front of a great magnifying mirror in a bathroom with amazing lighting in a hotel room in another city without your kids.   I loved that bathroom.   This is my Tuesday night pony tail for the 2nd  Alkaline Trio show.