← Almost Divorce- Prologue
In honor of Father’s Day, a note about Daddies →

I’m breaking up with you Camel! Oh and it’s you not me. 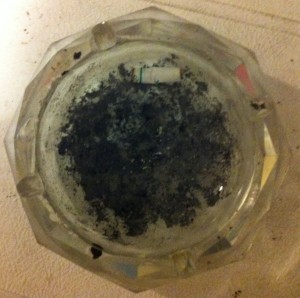 It’s Monday night right now, and I have one cigarette left.  When this gets published on schedule in the morning I will officially be a non smoker.  Admitting I am  actually a real smoker is difficult for me. I’ve been picking up and putting down this habit since  pre-college.   I used to like to say I was just a social smoker. My smoking journey looks  goes like this

I had parents that smoked, both of them. In the house with us sitting right there, in the car with us in it. I don’t think any of my friends had parents that smoked and I have often wondered if my clothes smelled as terrible just living in that house as I imagined they must of.   Dad smoked Camel non filters and claimed he had been doing so since he was 10. He was born in 1931 so no one ever questioned the validity of this.   Mom (I call my stepmother mom, she has been in my life life since I was 3) smoked Camel Lights.  I remember not liking that they smoked.  Don’t step on the still burning butt in the yard  was not a game I was fond of.  I also pulled a full on  Beverly Clearly Ramona stop smoking signs on doors campaign when I was about 11 or so.   Didn’t work 🙂

Then came junior high, and a party at a cool girl’s house. And that is where my friends and I learned to smoke Marlboro REDS!   I didn’t really enjoy it, but it was certainly a “cool” thing to do in the early 80’s.   I don’t think we did it that much over the next few years.  High School it happened sometimes at parties or while going out. My cig of choice: Virginia Slims Light 120’s!  I had HUGE 80’s permed  hair. Since I didn’t KNOW my hair was actually curly, it had been so long most of  my life the curl was pulled out, except for a very awkward and awful feathered phase in junior high.  My hair does NOT feather, instead I had mountains that wouldn’t stay down.  So I had long, permed (already curly) HUGE hair and I needed that cigarette to stay as far away from my aquanet coif  as humanly possible.

That phase lasted through college and at some point in time  I moved to Marlboro lights and then ultra lights 100’s and most recently  to my main guy Camel Silver Menthol.    I would pick up the habit for say a vacation, or a boyfriend or a night out or a trip to Vegas. And then I’d put it right back down  again as if it was no biggie. I didn’t consider myself a real smoker.

And then… I became a Mother.  right about the time Mini Me was 18 months I picked it up again.   I did not smoke while preggers or nursing.  I would smoke for Mommies Night Out or pick up a pack for a go-live at work because I knew as the PM that shit was going to be stressful, and I wanted to get out of the command center and get fresh air.  I’d usually keep it to just one pack and then be done until the next time there was a social or stressful occasion.  Sometimes it would last past that first pack and bleed into another and another.   But  would eventually put them back down again and STILL didn’t consider myself a real smoker.

This is our 4th summer in this house.   I’ve been smoking more often that not for the last FOUR YEARS. I stopped briefly from time to time.   But would always end up right back at it. And then when The Husband and I started having issues the smoking increased exponentially.  We spent  many many hours having one uncomfortable conversation or another in our garage or on the patio smoking. We collectively went through a pack a day.  I kept this up when he moved out and still hadn’t stopped when he moved back in 6 months later.

There are MANY reasons why I shouldn’t smoke.  Among those:

Ability- I am basically a smoking idiot.  I’m not even 100% sure I  inhaled most of those cigs properly in my teens and 20’s.   I have thumbs that look normal but I can’t snap with them, nor could I use a lighter very well.  I went through a goodly portion of my smoking career having all my cigarettes lit for me or using the car lighter.  I  wasn’t totally incapable, but once I got used to having everyone else take care of me in this way I just got used to it and probably took advantage.  I like to be pampered, and  I’m sure I exploited this.    I got much better later in my 30’s.  But still I have burned my hair, my clothes,  and my cars on occasion.

Health-  There is a history of breast cancer in my family. I’ve had  mammograms since I was 25 and a  biopsy that removed a benign milk adenoma.  I was on BC for 15 years. I’ve had a collapsed lung (not from smoking and another story for another time).  I am obsessed with death and dying too early, yet I continue to inhale this poison into my body.   I am a runner, or rather I’ve completed on half marathon and would like to be a runner.  Smoking and running do not exactly go hand in hand, The Husband jokingly calls this resistance training.  It’s more like how to spit out giant nasty hockers onto the pavement without dribbling them  down your face training, it’s not pretty.

Vanity- I do not want that road hard  put away wet and went back out unrested look that so many smoking women get from all those years of smoking.   Smoking robs your skin of elasticity, hello wrinkles? Why pay all the money for Botox and  Beauty Control and then smoke.   I think it is an ugly habit.  I’ve seen myself smoking on cam and it’s not nearly as glamorous as I imagined it would be in my head.  I don’t like the way it looks  on me.

Role modeling- I don’t want my kids to smoke. I don’t like that I’ve done it long enough now that they know I do it and have seen it happen, in spite of my efforts to be sneaky. Plus if I’m in the garage smoking with The Husband then my kids are in my house literally running amok. They have learned that us in the garage= a ton of time to get into things.  They have started asking  “Are you and Daddy going to the garage?” I often feel like a bad Mother when these things happen.

The thing is, I’ve been on Wellbutrin for about 3 years now.  So I don’t even have physical cravings for nicotine.  My issues are emotional/mental.  I am emotionally addicted to those  Camel Silver Menthols and the momentary fun or  peace or down time they give me while I’m smoking them.

So later tonight, after I finish this post I’m going to head out to the patio and have a little break up session with Camel.    I’ll have one last fling with him and when I wake up I’ll be  a non-smoker.   Sure I’ll miss Camel at first,  but like all old flames that are bad for me,   as time goes on I won’t want him anymore and won’t remember why I liked him in the first place.

5 Comments on “I’m breaking up with you Camel! Oh and it’s you not me.”